MGO 400+ manuka honey has a relatively high level of MGO. MGO is produced naturally by the bees when they make the honey.

MGO gives manuka honey its special antimicrobial properties and is the reason why the honey is so sought-after.

The MGO rating scale is one of the two main ways of grading manuka honey.

The honey must be tested according to special guidelines and must also be tested independently.

Honey, MGO, MGO 400+
MGO 400+ Manuka Honey has a high level of MGO and Manuka Health tests all its honeys in its own laboratory. Traceability is also important to the company and they can trace all their honeys back to the beehive.
£55.49 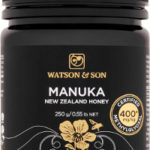